The artist Linda Simansky, born in 1995, has a clear conception of her art and what she wants to induce with it.

Linda Simansky lives and works in her studio on the countryside, in Unterpetersdorf, Austria, near the capital Vienna, surrounded by calming silence and nature.

Due to color-intensive, high-contrast surfaces, her pictures are expressive and definitely stand out!
Linda Simansky's works mainly address human emotions and also deal with tabooed topics, such as mental health.
With her high-quality, life-celebrating paintings, the abstract expressionist artist focuses on the joy in this world, which stands directly in contrast to the bad influences and news that bother us day by day, 24/7 in this modern world.

Among other things, the young Austrian artist draws inspiration from the surrounding nature from the area in Central Burgenland, where she was born and in which she's based. Furthermore, the artist often draws inspiration from music, which accompanies her again and again, sometimes very loud, in the studio whilst working. And last but not least, life itself is one of the main inspirations for the young artist.

Artists who have significantly influenced Linda Simansky's abstract path, are Hubert Scheibl and Gerhard Richter, who are considered role models in color intensity and contrast, and Anselm Kiefer, who is considered a role model in expressiveness. 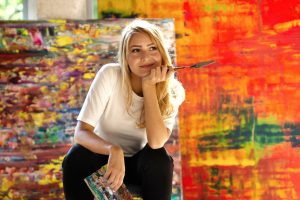